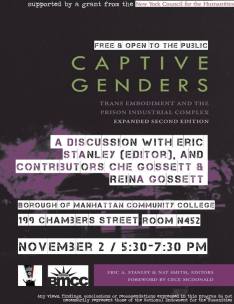 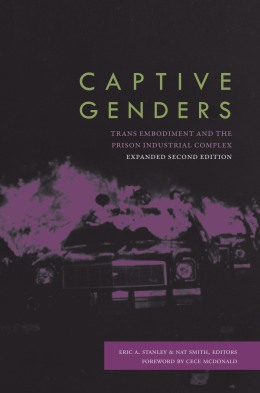 We are so excited that AK Press will be publishing the second, revised, and expanded edition of Captive Genders in October 2015. Along with all the brilliance of the first edition, it will include a new foreword by abolitionist and trans revolutionary CeCe McDonald which explores the importance radical books like Captive Genders played for her during her incarceration. From her prison cell, Chelsea E. Manning wrote “On the Intersection of the Military and the Prison Industrial Complex,” which thinks about the relationship between and military and the prison system. TGIJP Executive Director Janetta Johnson and journalist Toshio Meronek wrote, “Custody’s Long Shadow: Reentry Support as Abolitionist Work,” which argues that supporting people after they are released is vital to abolition. Radical Native transgender activist-scholar Kalaniopua Young wrote, “From a Native Trans Daughter: Carceral Refusal, Settler Colonialism, Re-routing the Roots of an Indigenous Abolitionist Imaginary,” which brings into focus the unsettled histories of colonialism, forced gender normativity, and prison.

The powerful analysis and compelling arguments in this collection force readers to conclude that the political and theoretical connection between prison abolition and trans and queer liberation is fundamental to social transformation and justice.                      –Beth E. Ritchie author of Arrested Justice: Black Women, Violence, and America’s Prison Nation

We will be doing a few book related events to celebrate the second edition. If you would like to help bring us to your city/town hit us up at captivegenders@gmail.com 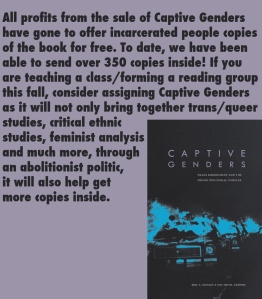 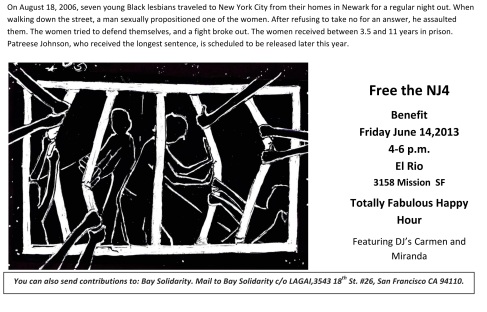 There is a great new review of Captive Genders along with Queer (In(Justice in the journal Antipode by Katelyn Angell and Stina Soderling. You can read the pdf here. Also, there will be a Captive Genders event (with Toshio Meronek and Eric A. Stanley) organized with Montreal’s Prisoners Correspondence Project  on March 29, 2013 at 3:30pm at 1800 Létourneux, Montreal Québec. The event is part of  RADICAL QUEER SEMAINE. There will also be a Captive Genders reading and discussion in Boston on April 24, 7pm at Northeastern School of Law. (free and open to everyone, more info soon).

Join us for an afternoon of documentary films profiling activists Kiyoshi Kuromyia and Marsha P. Johnson followed by a teach-in with activists Reina and Che Gossett about prison abolition and legacies of transgender activism.

Reina Gossett lives in Fort Greene, Brooklyn and believes creativity & imagination are vital in movements for self determination.  She is a trans activist & artist, working as membership director at the Sylvia Rivera Law Project and blogging at thespiritwas.tumblr.com.  Reina’s work has been featured in Barnard College’s The Scholar & Feminist Online, as well as Captive Genders: Trans Embodiement & The Prison Industrial Complex, Post Post Script Press and Randy Magazine.

Che Gossett is a member of ACT UP Philadelphia, on the steering committee of the HIV Prevention Justice Alliance, a board member with the Sex Worker Outreach Project and has been involved in queer and/or trans and gender nonconforming decriminalization, decarceration and prison industrial complex abolitionist organizing. Che is currently working on a biography of queer AIDS activist Kiyoshi Kuromiya.

Krys, one of the contributors to Captive Genders, is in need of some support after surviving 12 years in the CDCR. There is more information here where you can also make an online contribution, spreading the word also helps.

SRLP is offering a great 2013 calender, I just got one and its beautiful.  You can order one here.

This calendar was designed using the artwork of SRLP’s Prison Advisory Committee (PAC) members andcollages by artist, Caroline Paquita.  As PAC members are housed in New York State detention facilities, artists use whatever limited materials are available to them.  Often we receive drawings, poetry and doodles on used envelopes, lined paper or on corners of manila folders. Even while existing in some of the most violent and isolating conditions, members of PAC (like so many oppressed communities) continue to find ways to survive, resist and break down the distance and physical barriers created to systematically divide our communities.  This calendar was designed to raise funds to support the ongoing work of SRLP and to extend the reach of PAC.  It was also created to expand our historical knowledge, honoring those like Sylvia Rivera who never stopped fighting for us.

This essay reviews three recently published books that stand at the intersection of queer/trans studies and critical prison studies. These books show the multiple and complex ways that queerness pervades the US prison system and the devastating effects of criminalization and incarceration on queer, gender- and sexual-nonconforming, and LGBT people. The author argues that this scholarship also demonstrates the need for queer and trans studies to engage with the US prison system and for critical prison studies to use queer analytics and examine the incarceration of queer and LGBT people.

David Gilbert, a political prisoner and author of Love and Struggle: My Life in SDS, the Weather Underground, and Beyond wrote a great review of Captive Genders called “Transforming Society.” The review originally appeared in Critical Resistance newspaper, The Abolitionist and is available online though Social Text’s webpage here.

Captive Genders is an exciting assemblage of writings -- analyses, manifestos, stories, interviews -- that traverse the complicated entanglements of surveillance, policing, imprisonment, and the production of gender normativity.